Streetwear is a bit of a style mongrel. A sprawling, poorly defined movement that pinches from other styles, it’s taken pieces from skatewear and hip-hop down to mid-century style and the military.

The bomber jacket is perhaps the thing that unites it all. It started life as a flight jacket worn by World War I pilots and has undergone various remodels, although the MA-1 model created exclusively for the US military by Alpha Industries is often regarded the quintessential bomber. It swapped the earlier fur collar for an elastic one that allowed more room for a parachute harness and bags of lasting cool. 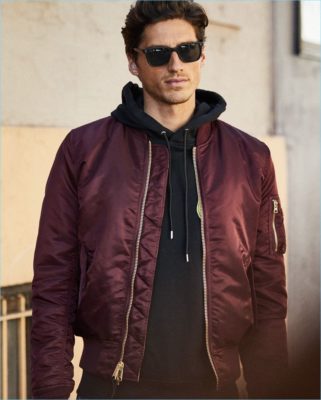 From then, the bomber jacket became more and more popular on civvy street, with two breaking points – its adoption by high fashion in the late eighties and early nineties thanks to Jean-Paul Gauthier and Raf Simons, and the ‘Kanye’ effect at the beginning of this decade when the rapper wore a customised MA-1 on his Yeezus tour.

This is when streetwear truly took the bomber to its breast helped along by Alpha Industries collabs with labels like Stüssy, Bape and Comme des Garcons. The MA-1 silhouette is still the one to be seen in, the wide-cut across the chest blowing out the upper body proportions for a piece that pops whichever street you might be on. Wear it one size up with a hoodie underneath and jeans or cargo trousers down below.