Workwear has been a mainstay in menswear for some time – think chore jackets, boilersuits, postman (or Derby) shoes – but more recently the trend has taken a step even further towards the functional. In recent seasons we’ve seen what look like fly-fishing jackets on the catwalks. There are models wearing sci-fi utility belts. And most commonly there’s what’s been dubbed my much of the industry as warcore. 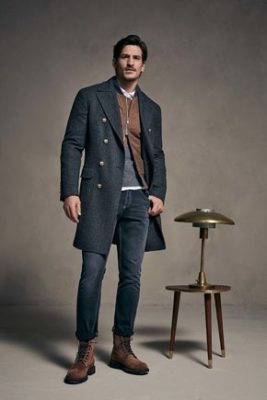 It’s no longer just the uniform of manual labour roles that have taken fashion houses’ fancy, but the utilitarian gear of the battlefield too. Sure, MA-1 bomber jackets and camo-print is evidence we’ve been borrowing from the battlefield for some time but we’re talking a whole outfit overhaul for the trend’s next step.

Skinny silhouettes have been benched and replaced by baggy cargo pants with copious pockets. The catwalks have been awash with utility bags, vests and chunky-soled shoes from everyone from Louis Vuitton to Alyx to Landlord. Technical textures and features like anti-stab fabrics and bullet-proofing, made specifically for the front line, have remained in street-ready designs, with some thinking fashion’s current obsession is a nod to the world being, excuse the hyperbole, in the midst of an impending apocalypse. Armour up!